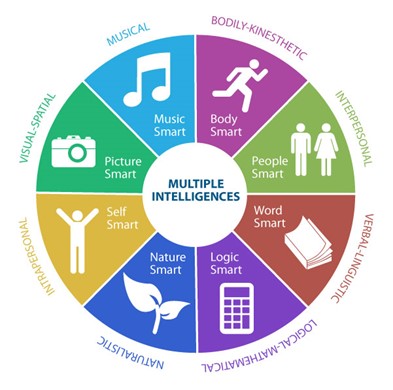 Spatial intelligence features the potential to recognise and manipulate the patterns of wide space (those used, for instance, by navigators and pilots) as well as the patterns of more confined areas, such as those of importance to sculptors, surgeons, chess players, graphic artists, or architects. People with spatial intelligence, such as Frank Llyod Wright and Amelia Earhart, have an ability to recognise and manipulate large-scale and fine-grained spatial images.

Intrapersonal intelligence is the capacity to understand oneself, to have an effective working model of oneself, including one’s own desires, fears, and capacities, and to use such information effectively in regulating one’s own life. People with intrapersonal intelligence, such as Aristotle and Maya Angelou, have an ability to recognise and understand their own moods, desires, motivations, and intentions. This type of intelligence can help a person understand which life goals are important and how to achieve them.

Lastly, is naturalistic intelligence, which involves expertise in the recognition and classification of the numerous species—the flora and fauna—of his or her environment. People with naturalistic intelligence, such as Charles Darwin and Jane Goddall, have an ability to identify and distinguish among different types of plants, animals, and weather formations that are found in the natural world.

The Multiple Intelligence Theory is a useful model for developing a systematic approach to nurturing and teaching children and honouring their individual needs and strengths within a classroom setting.

The concept of multiple intelligence does not require discarding previous ideas. Teachers can supplement current appropriate activities with new ideas that will reach even more of their students. In fact, Gardner contends that teachers need to guide students into using their combination of intelligence to help them learn whatever they want to learn, as well as what teachers and society believe they must learn.

The multiple intelligence approach provides a framework for us to identify how children learn to build on their strongest assets, to help them become more intelligent by exposing them to a variety of ways of learning, to better individualise for their interests and needs, and to use teaching strategies that make learning more appropriate, successful, and enjoyable for all children.

RAPE IS NOT A JOKE