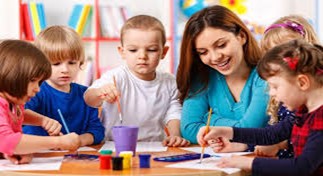 The term of ‘Childhood’ used in Early Childhood Education is used by the National Association for the Education of Young Children (NAEYC). “Childhood is referred to the period from birth to eight years old”.

Education in Malaysia is an ongoing effort towards further developing the potential of individuals in a holistic and integrated manner, in order to produce individuals who are intellectually, spiritually, emotionally and physically, balanced and harmoniously, based on a firm belief. Such and effort is designed to produce Malaysian citizens who are knowledgeable and competent, who possess high moral standards and who are responsible and capable of achieving high level of personal well being to contribute to the betterment of the nation, family and society.

Early Childhood Programme is any group programme in a centre, school or other facilities that serves children from birth through eight years old in part-day and full-day group programmes at centres, homes and institutions, kindergarten and primary schools. Another way early childhood programmes can be grouped is by the age of the children which the classification are infants, toddlers, pre-schoolers, kindergarten and children in the primary schools.

The Diploma in Islamic Early Childhood Education (ECE) programme develops the foundations for future early childhood educators in educating young children from newborn to 8 years. Early childhood education is a challenging profession, in which one helps children lay the foundation for their overall skills development and for succeeding in life. Early years studies confirm what educators have known for years: that what happens early in life sets the “wiring” for the brain’s future functioning.

The focus of DCE program is to nurture a balance development in each individual by providing for the growth of physical, intellectual, emotional, moral, social, cognitive and spiritual potentials as a Malaysian while upholding tenets of Rukun Negara.  The students are assessed on their ability to demonstrate learning outcomes in both academics and field work, as outlined by the Malaysian Qualifications Agency (MQA).